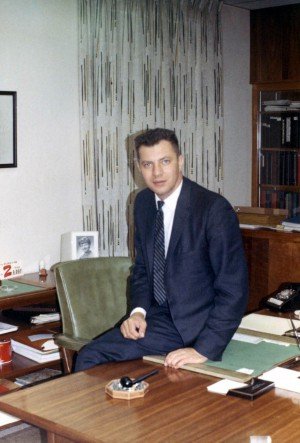 The journey to Chuck's first job in the insurance industry.

Chuck and I met in the fall of our freshman year at the University of Illinois. It was at an exchange between my sorority, Chi Omega, and his fraternity, Sigma Pi. I suppose exchanges are still a part of college life, but for those of you who aren’t familiar, an exchange was a social occasion, held at one of the houses in the afternoon. It was a way to meet new people in an acceptable way. Remember that in the 1950s, there were rules meant to protect girls and their reputation. There was no internet dating and nice girls didn’t go to the bars by themselves…only in a group or with a date. You could meet someone to date in your classes, though that didn’t work too well when you were in Home Economics, as I was my freshman year. Or a friend could “fix you up” with a friend of her boyfriend. Exchanges were a good thing, then. You talked to someone for a while, and, if nothing clicked, you moved on to someone else. In our case, in October of 1953, the Sigma Pi’s came to our sorority house on Wright Street in Champaign. I was sitting in a chair in the living room. Chuck came up and sat on the floor at my feet. Other brothers came and sat with us for a while, talked to me for a while and moved on, but he never left. I remember that he was wearing a pale pink shirt, which made me a little uneasy, since he was from Berwyn/Cicero, near Chicago. Cicero was well known as the home of the Mafia and no one I had ever met wore a pink shirt. Certainly, no self respecting male from southern Illinois would be caught dead in one. Also, he was too tall. He was so handsome, though, and polite and well behaved, that I couldn’t resist. We started dating soon after and soon became an established couple.

We were pinned the next spring. To be pinned means that the girl wears the guy’s fraternity pin every day next to her sorority pin. It is an outward sign that you are going steady. Getting pinned required a ceremony. The sororities and girl’s dorms had hours that were strictly enforced. The doors were locked at 10:30 p.m. Monday through Thursday, 1:00 p.m. Friday and Saturday and 11:00 p.m. Sunday. Violating curfew could get you thrown out of the University and could get a house in trouble, so it was strictly enforced. There was an exception for a pinning ceremony, however. Just after curfew, all the members of the Sigma Pi house showed up on our driveway, serenading us. We all went out and stood on the porch. The man who was giving his pin to his girl had to step forward and sing a particular solo. For Sig Pi, it was “My Sigma Pi Girl.” What made our pinning ceremony particularly touching was that Chuck could not carry a tune no matter how hard he tried. He was so bad, that when the fraternity would have choir practice, the choir master had asked him to just mouth the words so he wouldn’t throw everyone else off. But there he was, gamely singing to me, totally off-key, before he stepped up and attached his pin to my shoulder. My sorority sisters thought it was the sweetest pinning ceremony they had ever seen.

We dated exclusively through the rest of that year and into the next, going out every weekend and talking on the phone for hours when we couldn’t be together. But halfway through our sophomore year I began to wonder if I had tied myself down too soon. I hadn’t dated that many other guys in college. How did I know this was the right one? I think he had similar misgivings and we agreed to break up for a while and test whether we were really meant to be together. We did date other people and it hurt every time I heard he’d been out with someone else, but we persevered, giving it a good try. Then, just before Mother’s Day, he showed up on my doorstep with a Mother’s Day card, that began “To my Wife on Mother’s Day…” and that was how he proposed. The next fall, in our junior year, we were formally engaged.

Kids today will find it hard to believe, but in 1955, all the rules still applied when it came to unmarried couples. It was very hard to be young and in love and still have to wait to be together, abiding by those curfew rules. Self respecting unmarried couples did not live together. The prospect of waiting two years until we got out of school was too hard to contemplate. We decided we wanted to get married at the end of our junior year. This was a problem, however. We could not support ourselves and go to school as well. Chuck’s father was against it. He was sure Chuck would drop out of school, and since Chuck would only be the second one in his extended family to attend, much less graduate from college, he saw all his dreams for his son crumbling. My parents were willing to continue to support me. Finally, after many promises, his parents agreed to continue contributing the same amount as before to his college costs, and we began to plan our wedding for the week after finals.

And now we get to the job. Chuck felt that a married man should support his wife, so he started looking for something he could do while still in school to make some money. He was in the School of Business, with a double major in Economics and Finance. Of course, like every other member of his class, his dream job was to be a salesman for IBM. IBM was the symbol of success in the 1950s. Unfortunately, they didn’t hire part-timers, so he had to look elsewhere. The local office for Prudential was always looking for salesmen and they hired him immediately to sell life insurance. They gave him training and he was an immediate success. His supervisor was Denny Bing, who became a lifelong friend, and later, when he was Champaign County Clerk, hired C3, David and Jennifer to work for him in the Clerk’s office while they were in school. By the time we were in our senior year, and Chuck was taking interviews for a full time job, he was making more money part-time with Prudential than any other company was offering to full-time beginners. Even IBM came up short. There was one problem, however. His mother cried when she heard he was staying with Prudential. At that time, Prudential sold only life and health insurance and had two divisions. The largest and most prestigious was the Ordinary Division, where Chuck worked. The other was the Debit Division, a holdover from an older time, where salesmen went around weekly to collect cash premiums each week. That was what his mother remembered…the insurance man who came by tenement apartments each week to collect 50¢ for the breadwinner’s life insurance. She felt she had sacrificed all those years to put him through school and he was taking a job that didn’t need a college education. It took a lot of cajoling and showing her his paychecks to assure her it wasn’t the case.