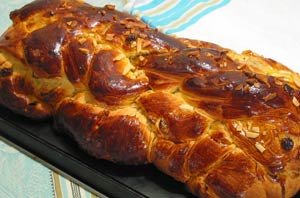 Growing up in southern Illinois with a father who was a picky eater, I hadn’t had a lot of culinary adventures when I went off to college. My mother, like everyone in her family, was an excellent cook. Her grandchildren swear that no one could compete with her fried chicken. She made wonderful beef pot roasts with potatoes, carrots and onions, baked fabulous pies and her homemade hot rolls are still the standard to which her granddaughters-in-law aspire. She and her mother and sisters canned peaches and green beans and helped the church ladies make homemade apple butter* when I was a child. She would probably have liked to vary the menu, were it not for my father, who knew what he liked and didn’t care to change. He was a creature of habit when it came to eating. He would get stuck on something and want it every other meal for six months to a year. Then he would be tired of it and didn’t want to see it any more. Not much chance to be an adventurous cook there. I loved my mother’s cooking, but I was always eager to try new things. My culinary explorations met a new test, however, when I encountered Bohemian cooking.

When we first met, Chuck told me he was a Bohemian. I figured he didn’t mean bohemian with a small b, which was the only way I’d heard the word used. (Dictionary definition: “a person, as an artist or writer, who lives and acts free of regard for conventional rules and practices.) In fact, I didn’t know there had been a country called Bohemia, but he was eager to explain that his ancestors came from a portion of what had become Czechoslovakia in 1918. In fact, his mother had emigrated from Bohemia to Chicago, along with her family, when she was eight years old. His father was born in Massachusetts to parents who had come from Bohemia before he was born. Being Bohemian was a point of great pride to Chuck and everyone in his family. Most everyone in Berwyn, IL (and neighboring suburb Cicero), where he lived, was either Bohemian or Slovakian, Slovakia being the other country that was made part of the Czech Republic.

Chuck’s Grandfather Hons, had emigrated from Bohemia in the first decade of the 20th century because the Germans had taken over Bohemia, also called the Sudetenland, and had decreed that all children were to go to German schools. He refused, wanting his oldest daughter, Rose (Chuck’s mother), to go to Bohemian schools, and because of this, he was blacklisted. He could no longer find work as a cabinetmaker. He left for Chicago, promising to send for his family as soon as he found work and saved the money. Rosie told me one time that she and her mother faced a certain amount of ridicule from people who doubted that her father would ever send for them. Apparently, that happened often. But John Hons was a skilled cabinetmaker and soon found work making the beautiful hand carved bars and back bars needed in Chicago hotels and saloons. In 1910, Rose, her mother and brothers, boarded a ship, steerage class, to sail to Nova Scotia. They were seasick every day of the long trip. Once in Canada, they boarded a train for Chicago. One of Rose’s memories was of pestering her mother to spend some of her limited money on bananas being sold on the train platform. The children, who had never seen bananas before, took one bite and refused to eat them. I suspect they didn’t know to peel them.

Bohemians are known for being frugal, but growing up in a Chicago tenement in the early 1900s, Rose learned to be even more so. I remember opening the pantry door once in her kitchen and being amazed that there didn’t seem to be one thing in it that didn’t have a red SALE sticker on it. I doubt there were any steaks served in that first tenement apartment. Instead, they learned to use less expensive ingredients and turned them into traditional dishes.

By the time I met Chuck in college, Rose had met and married Charlie (the first Charles Joseph Hruska). They had good jobs, he as a supervisor in a linen supply service and she as a secretary at Western Electric, and owned a brick bungalow in Berwyn. Chuck’s oldest sister Glory was married and lived nearby. His second sister, Carol, still lived at home and worked as a secretary at the Hotpoint plant. Those traditional foods were still being prepared in the Berwyn kitchen and, of course, that was what Chuck craved when he came home from college. He couldn’t wait for me to try them. That first Friday night when we arrived at his house, his mother had prepared his favorite, roast pork with sauerkraut and bread dumplings, all of it covered with gravy. It was indeed delicious, but it was rich. It was very rich. In fact, I lay in bed that night with my stomach roiling and complaining, gas pains shooting from one side to the other in my belly. “I’m not sure I’m up to this,” I thought. But by morning, after several trips to the bathroom, I was feeling better and ready to try new things. Over time I was introduced to liver dumpling soup, spaetzle, and fruit dumplings. None of this was what you would call diet food. For instance, fruit dumplings are served with copious amounts of cottage cheese, covered with melted butter and sprinkled with sugar and cinnamon. I drew the line at some of the most frugal dishes, pickled pig’s feet, headcheese and homemade “smelly cheese,” that had to be kept on the attic stairs because it would stink up the whole refrigerator. Never mind that when you opened the attic door it almost knocked you out. (There is only so much one is required to do for love.)

Rosie could bake, too. One of the favorites was kolaches, similar to small round cookies topped with fruit paste. It was easy to load up on two, three, four or six of these after a big meal. Always at Christmas, but also at other times during the year, she would bake houska, a braided bread filled with candied fruits and nuts. It was delicious at any time, but it made a wonderful breakfast with coffee.

Of course, once we were married, I had to learn to make some of these dishes myself. They became our family favorites, too. Last week, David e-mailed to ask for the recipe for fruit dumplings and I pulled out the tattered, handwritten instructions. Like most recipes from mothers, it contained phrases like, “cream to moisten.” My mother’s favorite was “add flour to the consistency of cake batter.” After all, they learned from their mothers and nothing was ever written down. I’ve included a few favorites for you to try and I’ve filled in a few instructions to make them more clear for those of us who are used to written recipes.

Happy cooking and think of Grandma Hruska (Rosie) when you enjoy the fruits of your efforts.